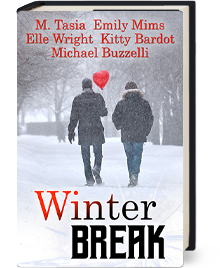 Five contemporary new adult m/m stories where navigating the path to new love can be trickier than expected.

Will doesn’t want to be tutored, even though he knows he needs it. He has to maintain his grades to keep his scholarship to USC. He’s so not feeling the condescension coming from his tutor, Oliver, but he has to admit, the dude’s into what he’s doing and he’s smart. What Will didn’t expect was to be into Oliver.

Texas A&M is huge and the chance Brody would run into Lemar next semester are slim to none. They share burritos before Brody has to hit the road to get home for the holidays. Texts, phone calls, and family drama make being apart worse, especially since they barely know each other. But it seems what they started has more promise than either of them anticipated.

An unexpected matchmaking attempt by a member of his study group has Rad reeling. Sky is too handsome, too self-assured, and too much of a distraction. Their start holds promise, but dark twists and turns, and a fair amount of heartbreak, scuttles what Rad thought would be something with staying power.

After an amazing kiss, Liam and Brady plan to spend a whole day together before they head home for winter break. But bad weather has Brady leaving sooner than expected, and when Liam gets home, he learns the fam is going to their cabin – no phone, no electronics. Brady’s sure one kiss isn’t enough to bridge the unexplained silence, but Liam surprises him in more ways than one.

Ryan’s unrequited crush is the only reason he goes to film class. The dude looks like he’s the next cover model for Surf Magazine. He’s also a serious film maker, and Ryan’s worse than an amateur film buff. They seem to find common ground, but everything that could interfere does and days later Ry’s pining on the other side of the country while visiting his family for the holidays. Of all people, William Shakespeare gives Ry hope by making a serendipitous appearance in Kyle’s room.