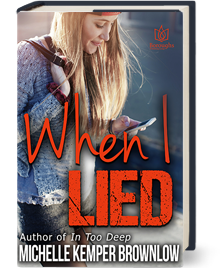 When Kate created her sexy online persona, “Lexi,” she never expected the lies to spin so far out of control. But now one of the biggest rock stars in the world, the brilliant but damaged Oliver Walt, is in love with her, and revealing the truth means not only breaking her own heart but sending the musician into a tailspin from which he might never recover.

Lexi is just the sort of girl a dark and brooding rockstar like Oliver Walt would fall for. Beautiful. Wild. Fun. The only problem?

LEXI IS A LIE

Bookish Kate Green knew she needed to brush up on her social skills before her first year of college, so she created an online persona to chat and flirt. And who better to practice on than talented and tormented rock frontman Oliver Walt? After all, the lead singer of her favorite band would hardly notice one more adoring fan. Except…he does. And with a single private message, Kate’s world changes forever.

Then Oliver wants to meet in person. Kate knows she has to come clean, but things are never that easy, so instead she enlists the aid of her beautiful and calculating study partner…which turns out just the way you might expect. Now, with Gretchen refusing to stop being Lexi, the lies grow bigger by the hour—and so do the stakes. Kate’s heart and Oliver’s life.