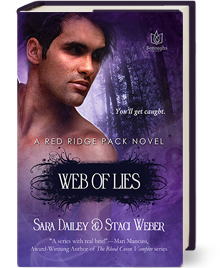 In the midst of a struggle for control of his pack, eighteen-year-old werewolf enforcer-to-be Luke Stanton meets the one girl who will destroy everything…or complete him.

TANGLED
Eighteen-year-old Luke Stanton is focused, strong, and intimidating as hell. He has to be. As the future enforcer of Red Ridge, it will be his job to keep the other weres in line. So avoiding close friendships, pack drama, and especially pack females is in his best interest. He witnessed firsthand what love did to his father, so casual human hookups are enough.

Then she arrives: Scarlett Reed. She arouses something primal in him, something undeniable. But just as Luke gives himself permission to finally experience something real, the truth bursts free. The were beauty is harboring a secret so devastating it has the power to destroy him. At the same time, the pack is splintering over a battle for leadership, and Luke’s strength is needed more than ever. It is a time of upheaval, of the destructive power of lies. Everything he thought to protect is in danger: his family, his friends…and most of all, his heart.