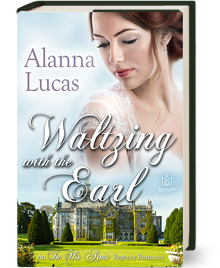 Waltzing with the Earl

Believing he is cursed, Tristram, Lord Trevena, the Earl of Longstone, agrees to do just one favor for a friend, to dance with the man’s sister, but the beautiful and headstrong Isabel Albryght will settle for no less than claiming his lonely heart.

Raised by her doting older brother, Isabel Albryght grew up cosseted and protected. She enjoyed her life in the country, her books and her freedom. Then Weston married. Within months Isabel's best friend married. It seemed it was time for Isabel to marry, too, except, socially awkward and a bit too keen for most of the ton, she proceeded to have the most horrible season on record…until she was approached by Tristram, the Earl of Longstone.

Twice. Two dances. That was all Tristram could offer anyone when considering his family curse, which had taken all he loved in the last ten years, so his promise to the beautiful Miss Albryght’s brother was simply that. The ton would soon see she was a desirable partner, her awkwardness would fade and other young swains would beat feet to her doorstep. But then he held her in his arms, and the delightful Isabel became his beating heart. Headstrong and full of passion, she believed she might waltz them away from Death. She alone could tempt him to try.