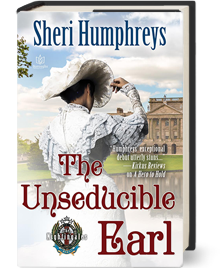 When an earl who’s given up on love and has settled on an engagement to a darling of society falls for a Crimean War nurse, he must either forsake his love or embroil them all in scandal.

The end of the Crimean War brings Victoria Thorne home to face a society that frowns on women with brains, education and experience, especially one who could be a physician. Though she proves herself a skilled nurse, Victoria finds she is no where near as revered as her namesake. And worse, she is falling for her patient’s betrothed brother, the Earl of Cheriton.

Buckling to the pressure of his position, Robb Merrick, Earl of Cheriton, becomes engaged to a darling of society. Yet, to his great consternation, he finds himself captivated by his brother’s nurse. She makes Robb feel alive, instead of choked by his title and position. He craves the freedom to pledge his love and loyalty, but ending his betrothal means entangling them all in a horrendous scandal. He is an honorable gentleman; Robb can’t break his vow. Yet if he doesn’t, all hope of happiness is lost.