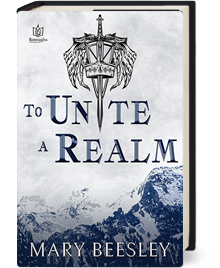 To Unite a Realm

To protect her family, Vera agrees to marry the son of her country's arch enemy only to learn the real villain lies much closer to home.

THROUGH A PRISM OF LIES

Vera Wilson, youngest daughter to the leader of her country - a county conquered by the tyrannical Grays - agrees to marry Angus Gray, heir to the throne of The United Realm. She hates him and everything his clan represents. But she has to protect her family and believes this marriage will keep them alive - unlike the friends the Grays have already murdered, one right in front of Vera.

After a hasty ceremony and an awful wedding night, Vera travels to Alta Glenn, home to the Grays. At first, life there is excruciating, but over time she learns that everything she's been taught, everything she believes about the Grays and their clan is nothing more than a web of well-constructed lies.

Almost too late, Vera protects Alta Glenn from impending disaster and realizes her husband is the exact opposite of what she expected him to be.

Now, she doesn't know if it's possible for him to ever love her.