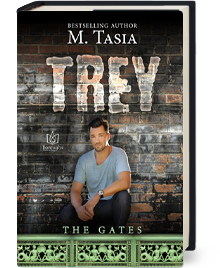 As if life couldn’t get any worse than being gut shot while interrupting a hit, Trey’s the target of an escaped lunatic he put in prison, which explains the NYPD Detective guarding him in all the right ways.

Talk about preconceived notions. NYPD Detective Anders Nilsen is sure Trey Stoneham is the scum of the earth: a tell-all journalist with a sketchy PI background. But truth is stranger than fiction, and it turns out Trey is a hero twice over.

When a serial killer Trey helped put away escapes prison, Anders has to stick to Trey like glue, which happens to be a job he’d gladly take on for a lifetime.

The road to falling in love is fraught with emotional and perilous landmines, and Trey is fine facing danger – he’s dodged a bullet before. Well, not really, but it didn’t kill him. Falling for a real-life Viking might do him in, and what a way to go.

Unless Trey’s able to face down the demon from his past and put him away for good, happily-ever-after will remain the stuff of novels.