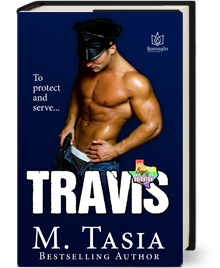 The world can be a cruel place, and Travis Boone knows that better than most; wracked with guilt and living life as an outcast, finding love and happiness are the furthest things from his reality, until Bo Mason.

After living on the streets and in his car, Travis has found a home in Brighton, Texas. His job as a cook at the local diner pays enough for him to afford a small apartment, and, for the first time in years, he's able to feed his passion, buying a few art supplies so he can sketch. He's safe, and, oddly enough, feels accepted in this small town. And, for reasons he cannot fathom, Bo Mason, a gorgeous cop, seems interested. While flattered, Travis knows if his secrets are revealed, Bo won't want to have a damn thing to do with the likes of Travis Boone.

IS MORE THAN SKIN DEEP

From the moment he saw the new blue-eyed cook at Brighton's diner, Bo Mason fell. Hard. And while getting close to Travis Boone has been like gentling a terrified animal, Bo knows there's a special person hiding behind those small smiles and closely guarded secrets. Slowly, Bo starts to peel back the layers cocooning Travis and learns the heart of an angel beats inside the most beautiful man Bo has ever known.