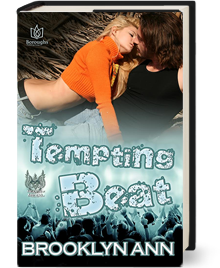 As his bandmates in Bleeding Vengeance start settling down, drummer Roderick Powell wonders if his sexy neighbor might be the cure for what ails him, but Gwen seems immune to all of Rod's charms.

Bleeding Vengeance’s drummer, Roderick Powell knows he’s a sod for feeling glum, especially after moving into a beautiful new home in a smart Denver suburb. But all his mates are partnered or married, and dreadfully happy. It’s enough to make a rockstar rethink his options. And even though his sexy neighbor has given him the brush-off, he’s decided to have another go – at this point he has nothing left to lose, apart from his heart.

Gwen Mason’s romantic past has been bumpier than most – twice divorced by thirty, she’s had enough of broken promises. An ER nurse who keeps a brutal schedule, she’s happy to become known as the neighborhood crazy cat lady. But…the most delicious man has moved next door. He’s British, he’s famous, he’s a rockstar. And, hard as she tries, Gwen can't keep Rod Powell from breaking all her rules, and suddenly she sees a future she never believed possible.