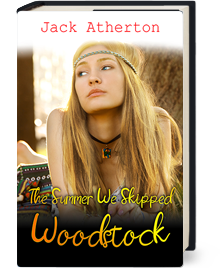 The Summer We Skipped Woodstock

The summer of 1969 was filled with all sorts of marvels: music, riots, unbelievable sorrow, and incredible acts of bravery, the biggest one being Leon taking a chance on love.

For high school senior, Leon Kraus, the summer of 1969 truly was the summer of love. A bellhop at Salzman’s Hotel—the New Jersey equivalent of The Catskills—Leon’s love of music brought him a joy like no other in more ways than one.

In the midst of the marvels of the first moon walk, gay rights riots in Greenwich Village, and Woodstock, Leon found Alyssa, who gave him the courage to love.

A camp counselor at Salzman’s, Alyssa Lawrence thought Leon Kraus, a classical pianist who wore big black glasses, was cute in a doofy sort of way. Until she got to know him. Then he became Peter O’Toole and Richard Chamberlain rolled into one—slender and elegant and…dreamy.

Over the course of their memorable summer, Leon’s kisses became perfect, and his bravery was right up there with the astronauts. Except Leon took a chance on love, and that changed their lives forever.