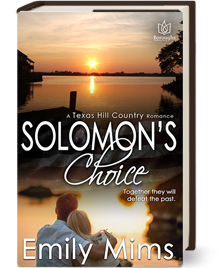 Together they will defeat the past. When Dr. Caroline Stern moves to the Texas Hill Country to share custody of her rescued son, the last thing she expects is to fall in love with the little boy’s sexy father!

ON CHRISTMAS DAY… the life of Dr. Caroline Stern changed forever. Her husband was murdered, her baby son kidnapped. When she found the boy again, he was with his biological father - a man Caroline never intended to meet.

There seems no obvious tie between Jack Briscoe and the violence of sixteen months prior, but Caroline just wants her son back - something Jack seems unwilling to grant. He wants the boy, too, and when a wily old country judge demands the two of them work out a shared custody arrangement, Caroline finds herself in Texas Hill Country for longer than expected.

Then she learns Jack wants her, too. And she might want him.

In the beautiful town of Verde, on the shores of Lake Templeton, she begins to rebuild her life. But the dark clouds of the past have not vanished completely, and one last storm of deceit remains. A choice must be made, and only the deepest love will see them through.

Rachel's Favorite Villain
Miranda Rewritten
Welcome Home
For the Thrill of it All
Once, Again