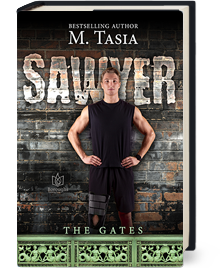 After a car accident nearly destroyed his family, Sawyer is struggling to make ends meet knowing nothing good will every happen in his life, until he meets a man who isn't what he seems, and becomes more important than Sawyer ever believed possible.

When Sawyer Hudson has a run-in with the mercurial executive chef at The Gates where Sawyer works as a dishwasher, he's certain he's going to lose his job. For anyone that would be horrible. For Sawyer it's a death sentence for the person he loves most in the world: his disabled brother.

Award-winning world-renowned executive chef, Alexander Larsen, has time for his kitchen, his culinary creations, and little else. As a member of a family known for its wealth and philanthropy, Alexander enjoys privilege few can imagine.

Living at the extremes of the life situation spectrum, Sawyer and Alexander find themselves thrown together in a series of events that bring the men closer in unexpected ways, and opposites attract becomes the understatement of the year.

Not everyone is happy about the burgeoning love affair, but these two men have found something neither ever expected, and to hell with anyone who tries to keep them apart.