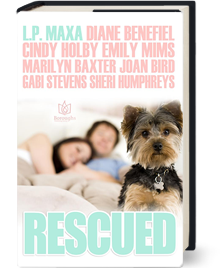 A heart-warming anthology of 8 great stories about love and rescuing each other while saving a dog in need. Proceeds go to Project Freedom Ride.

Bleu - L.P. Maxa
Over the past few months Bleu and Maykin have become best friends. They hang out all the time, especially after Bleu punches a guy for trash-talking Maykin, and gets sentenced to community service at an animal shelter. Cuddling puppies leads to finally giving in to the attraction they've been avoiding. And becoming dog parents seals the deal. Forever.

Burnover - Diane Benefiel
After a horrible year, including getting dumped days before her wedding, Eva decides to find a forever friend at the animal shelter. Finn, a feisty doggie escape artist, runs over to Eva's new next-door neighbor, the firefighter hottie who's been flirting with her over the café counter where she works. Eva intends to avoid Diego Jones, but not for long. A firebug with an unhealthy attachment to Eva forces her to rely on Diego for more than protection. He's captured her heart, and he plans to keep her loved and safe for the rest of their lives.

Abandoned Love - Cindy Holby
5 a.m. and bakery owner Emily Redding finds herself trapped in a dumpster while trying to save a little dog and her newborn pups. Sheriff deputy, Luke Hall responds to the 911 call. A handsome but taciturn man who is new to the area, Luke slowly draws Emily in with his easy manner and winning smile. As they search for the culprit who is dumping helpless dogs all over the community, they navigate their way into each other's hearts.

Chaos - Gabi Stevens
Mystic, Wyoming is home to all things strange and magical. Summoned to use skills unique only to her, Amelia Brent returns to the small town nestled in a picturesque valley. Little does she know forces are at work that will change her life. It all starts with a dog named Chaos, his dad, famous furniture maker, Roman Innis, and powers that reveal no one is exactly who they seem to be. Which is the best thing Amelia and Roman could wish for.

Sparks - Sheri Humphreys
Tiny, but mighty, a little dog races into a burning house to save... a cat. Firefighter Brian Becker swoops up the brave dog and takes him to the emergency vet. Dr. Jennifer Magee is everything Brian wants, but with their schedules, her three special needs pets, and him with his new friend, Sparky, the odds of them getting together seems impossible. Until Brian realizes anything worth having is worth working for.

Always a Hero - Marilyn Baxter
When a hurricane threatens St. Magnus Island, deputy sheriff, Noah Tindall finds Lucy Jansen home alone. She hasn't evacuated along with all the other residents, and the reason - her foster dog is giving birth. Six pups later, Noah convinces Lucy to go to his home on higher ground. No power, a tornado warning, and cramped quarters make for intimacy neither want, but both end up craving. Forever.

Oscar - Joan Bird
Jobless, single, pregnant, Fiona Kavanagh's life is a mess. When she finds a sweet, starving puppy beside the brook where Phee had been crying her eyes out, she takes the little guy home knowing they are rescuing each other. Dr. Cabe McCain is an ass. A good vet, an unbelievably great-looking man, but an ass. Until Phee learns his past might be the reason they will have an incredibly bright future together.

Cocoa - Emily Mims
Brittany Barstow grew up with musicians. Famous musicians. She knows all about their life on the road, and what that does to relationships. So even though handsome, guitar playing, country music singer, Lonnie Jeffries, of the Jeffries, helps her save a little dog from certain death, he is not boyfriend material. Not even close. Until he proves he is.