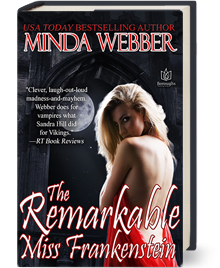 Clair Frankenstein is about to go on a madcap and award-winning romp through an insanely paranormal 1828 London, full of anachronism, hijinx, pop culture and romance.

The problem, Clair realized, was her family name. Her uncle’s fame - he’d created her cousin Frederick from a bunch of spare parts - was a grave matter. Everyone in the family was a success, while all she’d managed was a humiliating misadventure with pigs.

But her spirits were rising.

The Journal of Scientific Discovery was promising to publish a paper on the Discovery of the Decade, and she had a doozy. She simply had to prove Baron Huntsley - man of distinction, man of renown, man about ton - was a vampire. With his midnight-black hair, soul-piercing eyes and shiny white teeth, what else could he be? Oh, yes, the baron wanted a bite of her or she was no scientist. And then there were all those other monsters. You’d never expect so many in 1828 London! Pretty soon she’d expose them all, and on everybody’s lips would be...THE REMARKABLE MISS FRANKENSTEIN.