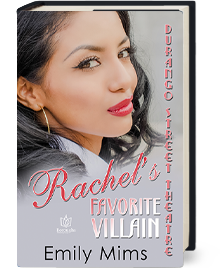 Rachel lives in a black and white, right and wrong world until she meets a man who committed a crime for which she believes has no excuse, and yet she doesn't know how to stop wanting him.

LIFE IN SHADES OF GRAY

Durango Street Theatre's Artistic Director, Rachel Castillo lives by a right and wrong code she sees no reason to change. When she learns an ex-con has been hired to be the theater's new set designer, she's livid.

But she has to admit, Harlan Burke is talented, and annoyingly attractive. Forced to work with him, she does her best to keep their relationship cooly professional.

Harlan will never get back the ten years he lost to being in prison. He's grateful good friends have supported him and helped him get a steady job. And everyone at the Durango Street Theatre treats him decently, except Rachel Castillo.

He can't avoid her, and on some level, he doesn't want to. She's too gorgeous to ignore.

Working closely together, Rachel does an about-face long enough for Harlan to taste what he's been missing. The reality of not being able to keep it...keep her, is crushing.

Remaining on opposite sides of an issue that'll always stand between them makes being together impossible until Rachel has to face a situation she never expected.