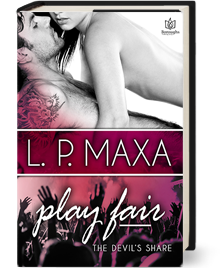 Guitarist of the world-famous rock band The Devil’s Share, no one would expect Jackson Cole to have a best friend who’s a girl, but his relationship with Bryan Lawson is too special to endanger with sex…until a different girl—the waifish nine-year-old who claims he’s her father—makes Jacks realize all that truly matters.

Jackson Cole has been called many things: immature, irresponsible, sexy as hell. But one thing he’s never been called is “Dad”—until Child Services shows up on his doorstep with a waifish nine-year-old claiming he’s the father. What’s a rock star to do? Call your best friend, who just happens to be super hot, funny, and even more commitment-phobic than you, and beg her to help. Of course, now that his friend is living in the same house, Jacks is finding it harder and harder to keep his hands to himself.

Bryan Lawson never expected to become pals with a charming, hilarious, breathtakingly handsome rock star, but after they met backstage at one of Jacks’s concerts, she couldn’t stop texting him. He’s just the sort of person she could imagine being with forever, except that, try as she might, she’s never managed to stay interested in a relationship for more than three months. Now that Jacks is a dad, the stakes are much higher. A breakup wouldn’t just ruin their friendship, it would destroy a little girl who’s just learning to love. But maybe also the game has changed.