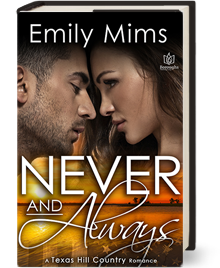 Deputy Sheriff Russ Riley, the player of Verde County, carries a terrible secret that stands in the way of a happy life with Angie Baxter, the spirited victim of a rash of violent crimes, whom he will protect, serve…and worship.

NEVER AGAIN
Angie Baxter is strong, sweet, and fiercely independent. She not only divorced her violent husband but rescued and raised his abused son, and she fulfilled a dream of running her own handmade soap and cosmetics shop. No man will ever again rule her existence or hold sway over the people she loves—no matter if he’s brave, handsome, and all that stands between her and a band of ruthless criminals.

UNTIL IT’S FOR GOOD
The playboy of Verde County, Deputy Sheriff Russ Riley is a disappointment to everyone. His family thinks they know why he was kicked out the military, and why he became police instead of entering their legacy law firm, but his secret goes much deeper than that. So he enjoys a life without commitment, knowing love and a family are out of the question. Then an innocent woman becomes the target of violence, and Russ realizes Angie Baxter is the one person who can make him a better man. To win her heart, he’ll have to not just protect and serve, but worship.