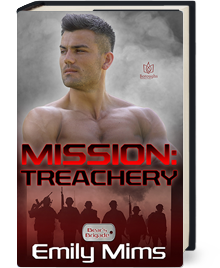 Colonel Bear Bustamante's job requires him to keep secrets and be flexible, but when a former one-night stand unexpectedly lands back in his life, making adjustments takes on a whole new meaning.

TREACHERY ON THE BATTLEFIELD OF LOVE

Colonel Angus "Bear" Bustamante lives in the danger zone, never knowing which mission may be his last. Being the leader of an elite task force is his passion, and his son owns his heart.

Until Wildcat, a former one-night-stand, arrives at Fort Sam. Bear's heart inflates, and he finds he wants more than a roll in the sheets with the sultry, sexy Dr. Felicia Castillo.

Felicia loves her work and is dedicated to doing her best all the time. With a sworn determination to stay away from complicated men, she finds herself paired up with a rugged, tough-spoken, hard-assed soldier on a sensitive operation that could make or break her career.

No, she hasn't forgotten their night together. She doesn't think she'd forget that night even after she's dead.

But Bear is determined, and more than sex is on the table.

When treachery strikes and accusations fly, the breach between them seems irreparable. It takes a near tragedy, and an incredible sacrifice to mend the chasm between them.

No one said the battlefield of love would be easy.