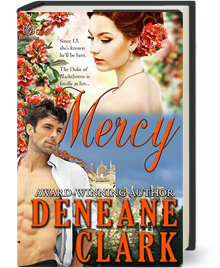 The youngest of six sisters, Mercy Ackerly has known since thirteen what everyone else is about to learn: She’ll marry the elusive Duke of Blackthorne.

It was love at first sight for thirteen-year-old Mercy Ackerly. The second she encountered the traveling Duke of Blackthorne, she fell in love…with his horses. And since Sebastian Tremaine was also perfect, they would someday be man and wife.

From the start, Sebastian has felt oddly protective of Mercy. Delightfully straightforward, the girl is everything honest and sweet, which is why he approved when his best friend married into the family—and then so did his other friends. But now Mercy’s all grown up. Now she’s facing the ton’s matchmaking mamas and their deceitful daughters, is joining a world he despises, be it the ballrooms and routs or the opulent crush. He would shield her if he could, would do anything but entangle his heart.

Sebastian will fight the inevitable for as long as he can. And then he’ll fight for it. Some matches are schemed for, some are arranged, and some have just been coming for a long, long time.