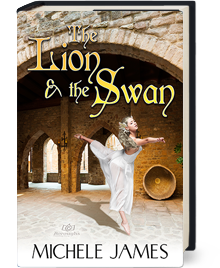 The Lion & the Swan

Destined to follow traditions he abhors, Asad, the Black Mane, prince and heir to the throne of the Great Valley, falls for Oona, the Swan, a princess from the far northern isles sold into slavery, and their story becomes legend.

A northern princess captured by pirates is sold into slavery and gifted as dowry to the cruel father of a prince betrothed to a woman he despises. So is the lot of Oona, the Swan, an exceptional singer and dancer, stolen from her father's ship along with her sister, the Dove. Of all the horrors that awaits them, including training to be pleasure women for the brutal king, Oona never would have believed his son, Asad, the lion, Prince Black Mane of the Southern Great Valleys, would capture her heart. Any contact or familiarity between her and the prince with the glowing amber eyes, guarantees a flaying, if not death, and Oona, grief stricken over the prospect of never again seeing the prince for whom she has fallen, must get her sister home, or the delicate Dove will surely perish at the hands of the despicable king.