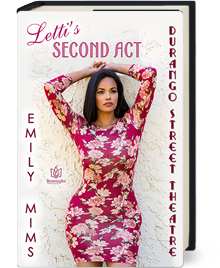 He’s too young, brash, and one hell of a distraction, but Letti can’t get Kevin Summerset out of her mind, and she might have to give into his pull after all.

Letti Aldrete’s dreams fizzled some eighteen years ago, but that doesn’t mean her daughter can’t live the life Letti always wanted. Sure, some people think she’s the stage mother from hell, but she won’t be denied. Letti is happy enough acting in the community theater’s productions, but increasingly, the leads are going to younger women, and Letti is pissed off. She looks good. Could play twenty-five with the right makeup, wigs, and costumes, and everyone agrees she’s the powerhouse female talent at the Durango Street Theatre. When her daughter is cast in a minor role in the theater’s newest production, Letti blows up, and does it in front of a one-night stand who is fifteen years her junior. Five years ago, delicious Kevin Summerset had been a wild, unforgettable night, but no way will there be a repeat performance, and no matter what he says, Letti’s not going there again. Kevin has other ideas.