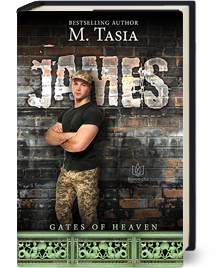 Alone has been a good place for former Army special ops team leader, James Masterson, then when he finds a family and almost loses them, it's more than he can to bear, but for love he learns he can conquer anything.

Too many ghosts live inside James Masterson's head, and they weren't the company he sought. Actually, he prefers no one's company, but he finds himself surrounded by overly friendly, meddlesome types while visiting his brother at The Gates in DTLA. Somehow, James becomes the unwelcome subject of Detective Richard Ross's attention, and, before he knows how it happened, James is caught up in Ross's family drama. When a madman tries to kill Ross's sister and her daughter, James's special ops Army training kicks in, and he becomes their hero, something he knows down to his core, he is not. The thing about crazy killers is they never give up, and when the final showdown comes to a head, James knows he'll do anything to keep the family he has found, especially the love of a sexy detective.