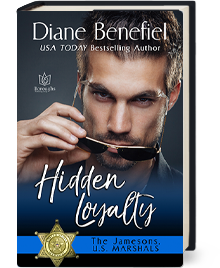 Seth Jameson’s relationship with one of his colleagues is fraught with the kind of tension that is frowned on in the Marshals Service, but he can’t seem to find a way around his heart.

Chief Deputy US Marshal Seth Jameson has mastered the art of hiding his emotions. Some might call the skill a survival technique. He calls it smart. He doesn’t need anything that could trip him up and jeopardize the most important operation of his career. Seth has managed to keep his attraction to Deputy Marshal Bella Nikolaev well hidden, but posing as an engaged couple while undercover blows his control to shreds.

Bella doesn’t trust anyone since she’s learned the people closest to you let you down. Case in point? She’s in love with her boss, the oh-so-hot Seth Jameson, and the one time she allows herself to believe in him, he proves that showing vulnerability is a big mistake. The problem is, the consequences of that one time can’t be ignored.

On a mission to find the kidnapped son of a federal judge, which would bring the fugitive Richard Jameson to justice, Bella and Seth are once again thrown together and are losing the battle of their hearts. In a situation where one wrong move can mean death, they have to depend on each other to survive in more ways than one.