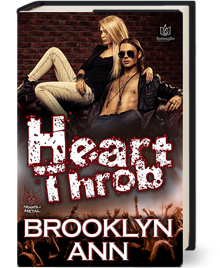 Irascible, grumpy, rude, tetchy, remote - scared. Viciöus's bassist, Brand Kife is hiding a secret, and it takes everything he has to ignore Lexi, until he can't.

Bassist for heavy metal band, Viciöus, Brand Kife is known for his scowl and inability to form meaningful attachments. When he meets Lexi Adams, the director of the documentary being filmed about Viciöus, Brand wants the smart, sexy woman, but knows he's not worth having. Staying away from the alluring beauty becomes impossible, but he has secrets he'll never share, not even with Lexi.

Lexi Adams isn’t ready to settle down and may never be. Every time she’d tried to date, the man wanted to put his needs first. Her first boyfriend had forced her to choose between him and film school. Her second had wanted her to support his film career. And now that Lexi’s career has finally taken off, she doesn't have time to look for a third. Until Brand Kife, who seems more than happy to keep his distance, until he can't, and evermore becomes a reality she embraces with her whole heart and soul.