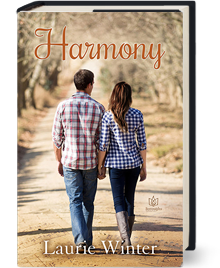 Crashing her car in front of a farm in Wisconsin was not the spa day Jordan had planned, but oh, the joys that lie within that farmhouse made the accident the best day of her life.

After the sudden death of his parents, Eli Hintz leaves a promising music career to come home and take over the family farm. Not long after, his wife abandons them, leaving him to carry on the best he can as a father, brother, and the dairy farmer he never expected to be. With so much on his plate, and a heart shattered in every way a man can ache, he refuses to be taken in by the gorgeous woman who crashed in front of his house and is now staying with his sister.

After changing her appearance and using a fake name to escape the limelight for a few weeks, burned-out Country music star Jordan Spencer finds herself stranded on a dairy farm in Wisconsin. Not the restful, private retreat she’d envisioned. But her soul has found something deeper than spa treatments - a beautiful man with a heart of gold who has sacrificed everything for his family. As Jordan’s commitments draw her back to Nashville, she searches for a way to keep Eli and his children in her life. She knows if he learns her true identity, he will never take a chance on a famous singer whose demanding schedule will pull her away from the farm her heart now calls home.