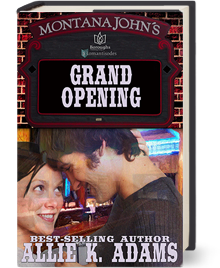 When the owners of Montana John’s bring in a “fixer” to help save their establishment from bankruptcy, the sexy Brit turns out to have all the right moves to ensure a grand opening of both the restaurant and Anne Feldman’s heart, body and soul.

Welcome to Montana John’s.
A place where dreams really do come true.

James Silverman. He sounded like a cross between James Bond and Jack Sparrow, two very delectable men worthy of torturing Anne Feldman in her dreams. He had blue eyes like Bond, but longer brown hair like Sparrow, minus the dreads. And he was here to pillage—her, Anne hoped.

Then he announced the facts. He was at Montana John’s to save it. He’d been brought in to “fix” the restaurant and make it profitable. Which meant things would have to change, sentimental things Anne had hoped would stay the same forever. It was true that the bar needed help, and she’d sunk her life savings into it, but how much could some Brit know about re-opening a restaurant in Montana?

Apparently as much as he knew about opening a woman’s heart, body and soul to true love.

Happy Hour
Under New Management
The Trouble With Love