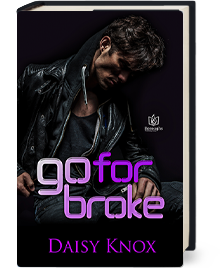 An average girl who’s always played it safe, Cady's life is out of control what with a scary stalker, a sketchy job that's probably illegal, and the f-boy investigator she has to trust.

Cady Blackwell is a victim of her own bad judgment: dating the biggest losers, attracting a stalker, and unknowingly accepting a job that's gotta be illegal.

She can’t quit until she finds a way to protect herself from being framed for her bosses' crimes, plus she wants to stay alive and out of prison.

But nothing’s easy when she’s distracted by a charming financier and a f-boy detective. She's in way over her head, and she's fighting for her life.

Her only chance for survival is to put her faith in the instincts she stopped trusting long ago.

It’s time to go for broke, which will either save her or cost her everything.