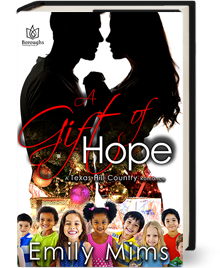 A Gift of Hope

Gina Reyes takes her job as Miss Santa seriously. There are more needy families in San Antonio than money to help them, especially around the holidays. This year she receives an incredible donation that comes with a price, her new co-chair. Her family has felt the sting of his company’s Big Picture for the Greater Good philosophy, and the man represents everything she abhors.

Lalo Navarro, a son of privilege, wants nothing more than to improve his beloved San Antonio. Imagine his surprise when he learns he’s a demon and not a do-gooder. Pushed into accepting the Miss Santa co-chair to raise his political visibility, Lalo is soon humbled by Miss Santa herself, the shapely Gina Reyes, who somehow becomes everything he wants. On opposite sides of just about every issue imaginable, the only thing that could bring them together would be to follow their hearts…and then a Christmas miracle.