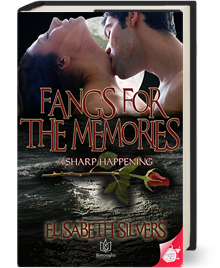 Fangs for the Memories

From an advertisement in the The Soulburg Herald:
SHARP HAPPENINGS

Looking for a night to remember? Contact us, the world’s only vampire escort service. Our fees are modest. Get your first bite of heaven.

An escort service run by vampires, Sharp Happenings promises one unforgettable night. Gabrielle Evans is about to get more.

An excerpt from The Chronicle of the Vampire:
THE HISTORY OF THE FIRST: VYTALIS

He grew much like any other child…until his thirteenth year. As his first thirst struck, the entirety of his village suffered. Word swept the land of that place’s decimation, of the monster spawned there, of his thirst for blood and his inhuman delight in carnage. Rumors spread that the Underworld had unleashed him. His birthplace was forgotten.

Years passed with no news. Eventually, however, new stories were heard, tales of creatures roaming the surrounding territories hungering for blood. They struck day and night, relentless in their quest. But nothing was heard of the First. Vytalis remained hidden, a creature of shadow, someone or something beyond the ken of mortal man.

Lust, Trust and Stilletos
The Officer and the Goon
Vertigo
Shades of Home