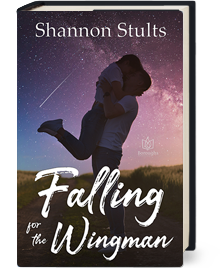 Falling for the Wingman

Three childhood best friends reunite after three years, but two of them are keeping deep, dark secrets, and because of it, Bentley's heart is being torn apart.

OF ALL THE PEOPLE SHE COULD'VE LOVED

When Bentley Erikson's first crush moves back to town, she believes it's fate's way of giving her a second chance at the boy of her dreams: Liam Haynes.

But three years is a long time, and she has no idea what to expect.

Desperate to get it right, Bentley enlists the help of Cooper Bradshaw, her arrogantly charming next-door neighbor who’s in dire need of a ride to school after he totaled his Maserati.

Cooper is as famous for his skills on the soccer field as he is notorious for his one-night stands with college girls. But he also happens to be Liam’s best friend, and he used to be Bentley's too.

When these three childhood friends reunite, Bentley learns Liam and Cooper are keeping deep, dark secrets, and because of their lies and deceptions, her heart is being torn apart.