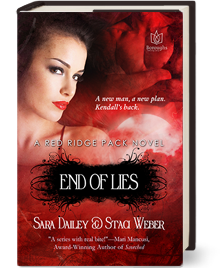 With the return of the devious Kendall Stuart, the Red Ridge Pack must depend on Cami Moore to save them, and Cami Moore must decide if she can trust—and perhaps even love—the hunky Gavin Reed of Crescent Hills.

The Red Ridge Pack is in danger, and not from “normals” finding out that werewolves live in their midst. This time it’s one of their own, the beautiful Kendall Stuart. Treachery, ambush, murder. An alliance with an opposing wolf pack. For a young woman set on vengeance, nothing is too much. This time she’s not going to fail.

But Kendall will be challenged. Arrayed against her and the Crescent Hills pack will be all those who survive the initial attack. Led by Cami Moore, as crafty as ever, the resistance will organize, infiltrate, strike where it hurts most. But first they must learn which hearts are true. Like Gavin Reed. Cami can’t figure out if the hunky, six-foot-four stranger wants more to kiss her or kill her, and where his loyalties lie. Something’s been building between them since the moment they met, and soon it will come an explosive conclusion.