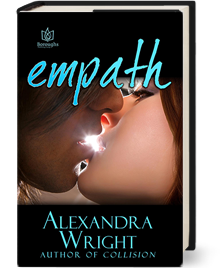 Lucy Jones has a gift, but to her it’s a curse – she is constantly trying to decipher whether the emotions around her are her own or if they belong to other people.

Lucy Jones isn't like other teenagers. She has spent her entire life feeling. Feeling everything from the anxiety of an upcoming test, to despair that runs so deep it threatens to shatter her. The catch? She can’t tell if these feelings are her own, or if they are the emotions of the people around her. When her father commits suicide, Lucy knows she won’t survive her mother’s dismantling and flees Sydney to settle on family property in the sleepy coastal city of Duruga. Population 200.

In Duruga, Lucy begins to find herself again. When the mysterious and captivating Heath Stone enters her life, Lucy is overwhelmed by unfamiliar sensations in his presence. Despite the sinister warnings from the townsfolk, she cannot fight the force of her attraction to Heath. As strange events occur, and the truth about Duruga’s sordid history is unveiled, Lucy suspects there may be more to the quiet town, and Heath, than she first imagined. As the mystery unravels, and danger draws nearer, Lucy may learn more about her past—and her gift—than she ever dared to believe possible.