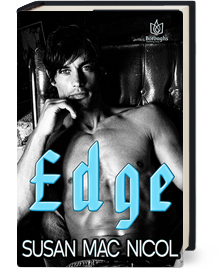 When you think them, words cost nothing, but when written, they can lead to heartbreak and tragedy.

Since he was young, Jory Longstone has been keeping a diary to catalogue his exploits, which helps inspire his music. He finds solace in managing his complicated life through the written word, which he never intended for anyone else to read.

Until one man did, and he now controls Jory's life.

While his band's star is rising, Jory remains trapped and ashamed - closed off from emotional attachments for fear of discovery.

And then he meets Damian Foyle, manager of his family-owned cinema, a place where Jory loves to hide and relax. The antithesis of a rockstar, Damian loves his martial arts classes, tinkering with motor parts, and the simple life.

Damian's first meeting with Jory is just shy of a disaster, and yeah, the second one isn't all that great either.

Jory is annoying, sexy as hell, temperamental, and one helluva rock god in tight trousers. It's all Damian can do not to burn up in the heat of the man's fiery personality.

But getting close to his heart is another thing altogether, and Damian won't settle for anything less.