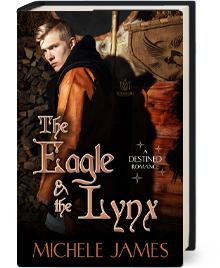 The Eagle & the Lynx

For a man with a past like his, Jerrik neither wants nor covets the cursed throne he assumes, and he feels pretty much the same way about marriage, except the woman he makes his bride is his best friend’s sister.

WE ARE OUR FUTURE

Alyssa asked Jerrik to marry her when she was eight-years-old. When he finally makes good on his promise to return when she's old enough to wed, nothing could prepare her for what becoming his queen truly means.

Jerrik is haunted by a tortured past, and has done everything he can to avoid any ties to his parents' mistakes. Life has other plans, and against his wishes, he agrees to assume the cursed throne that has taken the lives of his loved ones. Now a king, he must wed, and the only real choice is his best friend's sister - the girl who has loved him since she was a child.

His bride has grown into a beautiful, tempting woman, and Jerrik succumbs willingly to her charms. But lies and betrayal surround them at every turn, and while she holds true, he makes the ultimate mistake, almost ruining an incandescent love.