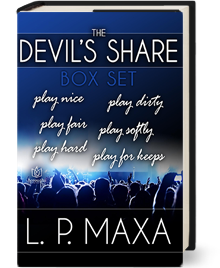 All six Devil's Share books in one fabulous place just in time for the summer!

Dash Conner, lead singer of the Devil's Share, could get anything or anyone he wanted—until he met Lexi Grant.

Smith James, bassist of the Devil’s Share, revels in being the ultimate bad boy, until he meets a good girl…who likes it dirty.

No one would expect Jackson Cole, the Devil's Share guitarist, to have a best friend who’s a girl, but his relationship with Bryan Lawson is too special to endanger with sex…until a different girl—the waifish nine-year-old who claims he’s her father—makes Jacks realize all that truly matters.

After years of pining for his best friend, a woman he could never have, Devil's Share drummer Luke Matthews finally meets his true match in the savvy Harlow Davis.

Take the wild ride of love, babies and marriage with the bad boy rockers of world famous Devil's Share.

The Gift of a Wish
Torn