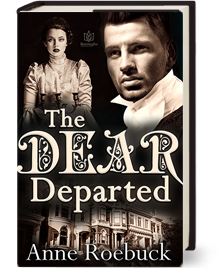 The widows of Victorian era San Francisco are dying of decidedly unnatural causes, and to expose the culprit Virginia Paley must partner with the darkly mysterious Jonathan Bradshaw, entering a world of occult rituals and unexplainable phenomena—and magical love.

Young widow Virginia Paley has no interest in attending the séances at The Society for Eternal Love, but the women of the society are dying mysteriously in their sleep, leaving their fortunes to Professor Arthur Chadwick, its charismatic medium. As her aunt might very well become the next victim, Virginia will do whatever she must to ensure that doesn’t happen. She will even join forces with the darkly mysterious Jonathan Bradshaw.

From the moment he spies her, Jonathan is smitten. But romance is impossible. Mrs. Paley is a respectable woman, and he himself is outside of society, an orphan, an ex-thief and a true wizard, able to hypnotize with a word and even separate his spirit from his body. No, he must instead remain focused on his goal, avenging his mentor’s death. But, facing a foe with power over demonic forces and Virginia’s very life in the balance, love might indeed be the only salvation.