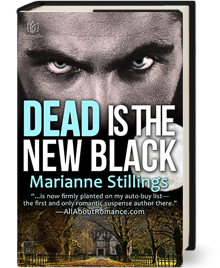 Dead is the New Black

Former romance author turned live-in housekeeper Stephanie Scott wants to believe her new employer’s oath to never hurt her, but the fact that he’s a Vampire, the cast of eerie characters tromping through Moonrise Manor, and the dead body in the library are making it hard to trust him—and his hypnotic blue eyes are making it difficult to trust herself.

Broke and desperate, failed romance author Stephanie Scott reluctantly accepts a position as a live-in housekeeper…to a Vampire. The very handsome Dr. Jonathan Van Graf, owner of Moonrise Manor, has sworn not to harm Stephanie, and he offers room and board to her ailing mother as well. And those eyes, those gorgeous blue eyes….

But the mansion is a crazy place populated by stranger things than the undead, including a Morticia Addams lookalike named Leech and a film crew making a docudrama to show the world that Vampires are just regular folks. Except, one of them is murdered the same day Steph and her mom move in. When bite marks appear on someone Stephanie cares about, she finds herself thrust into a real whodunit, or a who’s-sucking-on-whom. Is it possible Dr. Van Graf is everything she feared…or is he the hero she’s never dared to create in her novels?