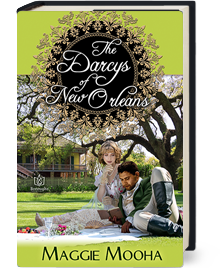 The Darcys of New Orleans

In this sequel to Elizabeth in the New World, Elizabeth and Darcy’s romance endures while their daughter Emma forms an unspeakable attachment to Phillipe, the son of a slave woman and the Englishman Elizabeth almost married.

In this sequel to Elizabeth in the New World, Elizabeth and Darcy's romance endures and deepens. After Elizabeth suffers a devastating loss, Darcy decides to take her, their daughter Emma, and their son, Bennet, to visit Elizabeth’s dear friend Poppy in New Orleans. Now a free woman of means, Poppy lives on a plantation with her husband, daughters, and son, Phillipe.

As the visit begins to work a tonic on Elizabeth’s wounded spirit, Emma and Phillipe have taken an instant dislike to one another. A free man of color who was educated in France, Phillipe harbors ill will toward the English. He sees Emma as a spoiled heiress who knows nothing of the struggles his family has endured. Despite their turbulent beginning, they fall in love, and learn that even in New Orleans mixed society, what they have together is forbidden. When yellow fever strikes both families, Elizabeth and Darcy face losing their son, and Poppy her beloved husband. Tragedy is compounded when the English fleet makes a surprise attack on New Orleans. Once again, Darcy and Elizabeth find themselves in the midst of conflict, and the young lovers are torn apart not only by society, but also by war.