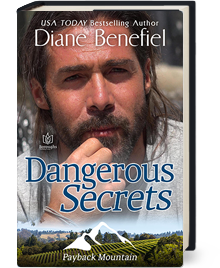 In the shadow of Payback Mountain, evil men with dark secrets framed an innocent man, put him in prison, and broke a young woman's heart — but Walker has returned and is about to even the score.

Eight years has been a long time to brew on the injustice done to Walker McGrath, but he needed space to get his head straight. To learn to breathe without the violence of his anger coloring his words and actions.

His return to Cider Mill Farm was bittersweet. He'd come back for vengeance, but one look at the woman he'd been forced to leave behind altered his trajectory for retribution.

Delaney Bryant wants nothing to do with the man who broke her heart then trampled it to dust. He left her once and she's not going to give him the chance to do it again. She's stronger than the young woman she'd once been. Strong enough to fight her powerful attraction to Walker.

It didn't take long after Walker's return for strange things to happen in their small town, and his fear for Laney's safety escalates along with her inescapable draw.

His need to protect her is as strong as his insistence he's home to stay.