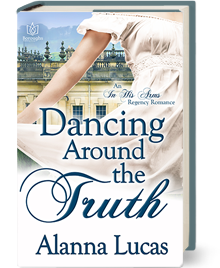 Dancing Around the Truth

Dark secrets, lies, and a far too enticing widow threaten to destroy the orderly world Benjamin Weston, the illegitimate son of the late Baron Albryght, has made for himself...and Mrs. Philippa Keates might just also hold the key to unlocking his heart.

Mrs. Philippa Keates thought she’d found her happily-ever-after when she eloped, but two years and no children later she is named a widow. Then a woman claiming to be her late husband’s wife appears, and Philippa demands answers.

Benjamin Weston, the illegitimate son of the late Baron Albryght, has made a name for himself conducting investigations for those willing to pay a high price for discretion. When a childhood friend shows up on his doorstep, begging for his assistance, Weston fears most of all that she will discover the truth...and thus bring further scandal to herself, the only woman he has ever loved. But as he unravels her mystery, as secrets of his own begin to come to light, soon it becomes clear that there is more at stake than just Philippa’s reputation—and nothing less than her heart.