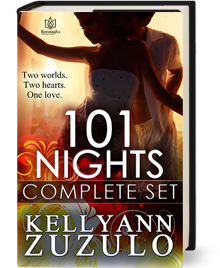 BOX SET (the complete set of five 101 Nights Romantisodes): Their marriage was to be one of convenience, a desperate temporary ploy to save a land of magic and fire, but hotheaded djinni Amari Zarin and handsome human scientist Jason Masters might just have the right chemistry to rock both of their worlds.

FROM A LAND OF FIRE
…TO SOMETHING HOTTER

Amani Zarin of Jinnistan is proud. She, like her uncle, is a djinni—powerful, hot-blooded, almost immortal. But her people’s flames are winking out. Her land is dying, from its sparkling waterfalls to its endless seas of sand to the Silver Citadel itself. The energies of her kind leech away faster than they can replenish.

Only, one man might have an answer. A human. And so her uncle has sold Amani into slavery, practically forced her into a marriage of convenience. To Earth she will go, to brave the alien world that is suburban and corporate America, conniving board members, hostile ex-lovers and nosy neighbors. It is a temporary arrangement, true, to an unquestionably brilliant scientist, a seemingly handsome, kind and virile specimen. But humans have ever been a lesser race, conniving, mundane, cursed with short life spans and no magic. How can Jason Masters compare to those of her kind who might seek her hand? And yet, he must. Their bond must prove true, for Amani and Jason’s chemistry will literally rock both of their worlds.